Our paper on predicting sleep stages from resting-state fMRI has been accepted for publication in NeuroImage! The title of the manuscript is “Validation of non-REM sleep stage decoding from resting state fMRI using linear support vector machines”. A Poster related to this were can be accessed here.

Our microarray probe re-annotation pipeline has been accepted for publication in PLoS ONE. The paper has the title “Re-Annotator: Annotation Pipeline for Microarray Probe Sequences”. A preprint of the manuscript can be accessed on bioRxiv!

The paper is now online!

I am looking for a PhD student to work on Imaging Genetics in Alzheimer’s disease and frontotemporal dementia (FTD). More information is available here:

Our paper with the title “Regional Brain Hypometabolism Is Unrelated to Regional Amyloid Plaque Burden” was accepted in Brain!

Our paper with the title “Node-based Gaussian Graphical Model for Identifying Discriminative Brain Regions from Connectivity Graphs” was accepted for oral presentation at this year’s MLMI held in Munich (in conjunction with MICCAI2015).

Abstract: Despite that the bulk of our knowledge on brain function is established around brain regions, current methods for comparing connectivity graphs largely take an edge-based approach with the aim of identifying discriminative connections. In this paper, we explore a node-based Gaussian Graphical Model (NBGGM) that facilitates identification of brain regions attributing to connectivity differences seen between a pair of graphs. To enable group analysis, we propose an extension of NBGGM via incorporation of stability selection. We evaluate NBGGM on two functional magnetic resonance imaging (fMRI) datasets pertaining to within and between-group studies. We show that NBGGM more consistently selects the same brain regions over random data splits than using node-based graph measures. Importantly, the regions found by NBGGM correspond well to those known to be involved for the investigated conditions.

Our paper with the title “Correlated gene expression supports synchronous activity in brain networks” appeared in this week’s issue of Science. 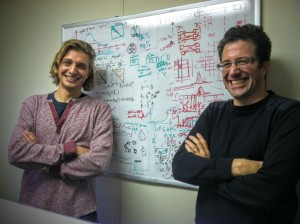 Our paper with the title “Genetic Differences in the Immediate Transcriptome Response to Stress Predict Risk-Related Brain Function and Psychiatric Disorders” was published in Neuron.

Summary:
Depression risk is exacerbated by genetic factors and stress exposure; however, the biological mechanisms through which these factors interact to confer depression risk are poorly understood. One putative biological mechanism implicates variability in the ability of cortisol, released in response to stress, to trigger a cascade of adaptive genomic and non-genomic processes through glucocorticoid receptor (GR) activation. Here, we demonstrate that common genetic variants in long-range enhancer elements modulate the immediate transcriptional response to GR activation in human blood cells. These functional genetic variants increase risk for depression and co-heritable psychiatric disorders. Moreover, these risk variants are associated with inappropriate amygdala reactivity, a transdiagnostic psychiatric endophenotype and an important stress hormone response trigger. Network modeling and animal experiments suggest that these genetic differences in GR-induced transcriptional activation may mediate the risk for depression and other psychiatric disorders by altering a network of functionally related stress-sensitive genes in blood and brain.

Our paper with the title “TBA” was accepted for publication in Science.

Our paper with the tile “Connecting Anxiety and Genomic Copy Number Variation: a Genome-Wide Analysis in Mice” was accepted for publication at PLoS ONE.

Genomic copy number variants (CNVs) have been implicated in multiple psychiatric disorders, but not much is known about their influence on anxiety disorders specifically. Using next-generation sequencing (NGS) and two additional array-based genotyping approaches, we detected CNVs in a mouse model consisting of two inbred mouse lines showing high (HAB) and low (LAB) anxiety-related behavior, respectively. An influence of CNVs on gene expression in the central (CeA) and basolateral (BLA) amygdala, paraventricular nucleus (PVN), and cingulate cortex (Cg) was shown by a two-proportion Z-test (p = 1.6 x 10-31), with a positive correlation in the CeA (p = 0.0062), PVN (p = 0.0046) and Cg (p = 0.0114), indicating a contribution of CNVs to the genetic predisposition to trait anxiety in the specific context of HAB/LAB mice. In order to confirm anxiety-relevant CNVs and corresponding genes in a second mouse model, we further examined CD-1 outbred mice. We revealed the distribution of CNVs by genotyping 64 CD 1 individuals using a high-density genotyping array (Jackson Laboratory). 78 genes within those CNVs were identified to show nominally significant association (48 genes), or a statistical trend in their association (30 genes) with the time animals spent on the open arms of the elevated plus-maze (EPM). Fifteen of them were considered promising candidate genes of anxiety-related behavior as we could show a significant overlap (permutation test, p = 0.0051) with genes within HAB/LAB CNVs. Thus, here we provide what is to our knowledge the first extensive catalogue of CNVs in CD-1 mice and potential corresponding candidate genes linked to anxiety-related behavior in mice.

Our paper with the title “Joint Feature Extraction from Functional Connectivity Graphs with Multi-task Feature Learning” was selected for oral presentation at PRNI 2015 (Stanford, USA in June 2015).

Using sparse regularization in classifier learning is an appealing strategy to locate relevant brain regions and connections between regions within high-dimensional brain imaging data. A major drawback of sparse classifier learning is the lack of stability to data perturbations, which leads to different sets of features being selected. Here, we propose to use multi-task feature learning (MFL) to generate sparse and stable classifiers. In classification experiments on functional connectivity estimated from resting state functional magnetic resonance imaging (fMRI), we show that MFL more consistently selects the same connections across bootstrap samples and provides more interpretable models in multiclass settings than standard sparse classifiers, while achieving similar classification performance.