Any large genome-wide association study corrects for population structure, in addition to restricting the sample to subjects of caucasian ethnicity. This is for the most part a practical necessity since mankind’s migration pattern across the globe has left its marks on our genome. Not correcting for these effects would lead to false-positive genetic associations. However, the topic of correcting for these population structure effects has for the most part not reached the field of neuroimaging.

It has been shown in earlier work that head and brain morphology is markedly different between continental genetic ancestries (paper). In a recent work we are showing that one can predict continental ancestry even from resting-state functional MRI. We have not established yet the reason for why this works, but we hypothesize that artifacts from head and brain morphology influence the observed connectivity pattern (paper). This highlights that neuroimaging data is susceptible to differences between genetic ancestries, i.e., population structure.

Do we need adjustment for population structure in neuroimaging? Yes, I think we should be more mindful about these effects and consider including genetic ancestry as covariates in imaging studies. The very same way we are addressing other confounding variables.

We have a PhD studentship available that is focused on uncovering the imaging and genetic basis of drug-resistant epilepsy. More details are available here.

Abstract:
Identifying genetic risk factors underpinning different aspects of Alzheimer’s disease has the potential to provide important insights into pathogenesis. Moving away from simple case-control definitions, there is considerable interest in using quantitative endophenotypes, such as those derived from imaging as outcome measures. Previous genome-wide association studies of imaging-derived biomarkers in sporadic late-onset Alzheimer’s disease focused only on phenotypes derived from single imaging modalities. In contrast, we computed a novel multi-modal neuroimaging phenotype comprising cortical amyloid burden and bilateral hippocampal volume. Both imaging biomarkers were used as input to a disease progression modelling algorithm, which estimates the biomarkers’ long-term evolution curves from population-based longitudinal data. Among other parameters, the algorithm computes the shift in time required to optimally align a subjects’ biomarker trajectories with these population curves. This time shift serves as a disease progression score and it was used as a quantitative trait in a discovery genome-wide association study with n = 944 subjects from the Alzheimer’s Disease Neuroimaging Initiative database diagnosed as Alzheimer’s disease, mild cognitive impairment or healthy at the time of imaging. We identified a genome-wide significant locus implicating LCORL (rs6850306, chromosome 4; P = 1.03 × 10−8). The top variant rs6850306 was found to act as an expression quantitative trait locus for LCORL in brain tissue. The clinical role of rs6850306 in conversion from healthy ageing to mild cognitive impairment or Alzheimer’s disease was further validated in an independent cohort comprising healthy, older subjects from the National Alzheimer’s Coordinating Center database. Specifically, possession of a minor allele at rs6850306 was protective against conversion from mild cognitive impairment to Alzheimer’s disease in the National Alzheimer’s Coordinating Center cohort (hazard ratio = 0.593, 95% confidence interval = 0.387–0.907, n = 911, PBonf = 0.032), in keeping with the negative direction of effect reported in the genome-wide association study (βdisease progression score = −0.07 ± 0.01). The implicated locus is linked to genes with known connections to Alzheimer’s disease pathophysiology and other neurodegenerative diseases. Using multimodal imaging phenotypes in association studies may assist in unveiling the genetic drivers of the onset and progression of complex diseases.

Our paper with the “Genetic study of multimodal imaging Alzheimer’s disease progression score implicates novel loci” was accepted for publication in Brain!

A Related abstract at OHBM 2017 can be found here.

Our paper with the title “Predicting outcome in idiopathic pulmonary fibrosis using automated CT analysis” was accepted in AJRCCM!

Our abstract “Rare genetic events in sporadic Alzheimer’s disease: a network propagation approach” was selected for an oral presentation at OHBM 2018, Singapore!

The discovery of rare genetic mutations in the APP, PSEN1, and PSEN2 that cause familial Alzheimer’s disease (AD) has had profound implications for our understanding of deisease pathognesis. There is much interest in investigating rare genetic variants that might increase risk for, or influence the phenotype of, sporadic AD. This however remains challenging due to the very large sample sizes required and the costs of performing whole-genome sequencing (WGS) in these cohorts. Early successes have included the discovery that TREM2 influences risk (Guerreiro et al. 2013), a discovery that has intensified interest in inflammation in AD. Studies such as the Alzheimer’s Disease Sequencing Project (Bis et al. 2017) continue to address this challenge. Here, we present a method to investigate the effects of rare variant in moderately sized sporadic AD cohorts, such as ADNI Our approach is based on signal diffusion on a gene-interaction network, inspired by its successful application to cancer subtyping (Hofree et al. 2013). We sought to develop an integrative approach to guide gene-based association testing with the knowledge of tissue-specific interaction networks. 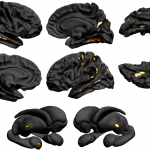 Our paper with the title “Susceptibility of brain atrophy to TRIB3 in Alzheimer’s disease, evidence from functional prioritization in imaging genetics” is now available online at PNAS!

Summary:
In this study, we use an experimental imaging–genetics approach for investigating the genetic underpinnings of brain atrophy in Alzheimer’s disease. We successfully combined state-of-the-art imaging–genetics methods and experimental gene expression data to uncover biology in brain atrophy. The experimental paradigm highlighted a significant role of tribbles pseudokinase 3 (TRIB3) in modulating the typical pattern of Alzheimer’s brain pathology. This result corroborates through rigorous data-driven statistical methods evidence emerging from previous studies about the role of TRIB3 in modulating known mechanisms of neurodegeneration, such as neuronal death, cellular homeostasis, and interaction with established genes causing autosomal dominant Alzheimer’s disease: APP and PSEN1. The developed integrated statistical–experimental methodology could serve as a roadmap for investigations in other disorders.

The ENIGMA Epilepsy paper has been published in Brain today!

Progressive functional decline in the epilepsies is largely unexplained. We formed the ENIGMA-Epilepsy consortium to understand factors that influence brain measures in epilepsy, pooling data from 24 research centres in 14 countries across Europe, North and South America, Asia, and Australia. Structural brain measures were extracted from MRI brain scans across 2149 individuals with epilepsy, divided into four epilepsy subgroups including idiopathic generalized epilepsies (n =367), mesial temporal lobe epilepsies with hippocampal sclerosis (MTLE; left, n = 415; right, n = 339), and all other epilepsies in aggregate (n = 1026), and compared to 1727 matched healthy controls. We ranked brain structures in order of greatest differences between patients and controls, by meta-analysing effect sizes across 16 subcortical and 68 cortical brain regions. We also tested effects of duration of disease, age at onset, and age-by-diagnosis interactions on structural measures. We observed widespread patterns of altered subcortical volume and reduced cortical grey matter thickness. Compared to controls, all epilepsy groups showed lower volume in the right thalamus (Cohen’s d = −0.24 to −0.73; P < 1.49 × 10−4), and lower thickness in the precentral gyri bilaterally (d = −0.34 to −0.52; P < 4.31 × 10−6). Both MTLE subgroups showed profound volume reduction in the ipsilateral hippocampus (d = −1.73 to −1.91, P < 1.4 × 10−19), and lower thickness in extrahippocampal cortical regions, including the precentral and paracentral gyri, compared to controls (d = −0.36 to −0.52; P < 1.49 × 10−4). Thickness differences of the ipsilateral temporopolar, parahippocampal, entorhinal, and fusiform gyri, contralateral pars triangularis, and bilateral precuneus, superior frontal and caudal middle frontal gyri were observed in left, but not right, MTLE (d = −0.29 to −0.54; P < 1.49 × 10−4). Contrastingly, thickness differences of the ipsilateral pars opercularis, and contralateral transverse temporal gyrus, were observed in right, but not left, MTLE (d = −0.27 to −0.51; P < 1.49 × 10−4). Lower subcortical volume and cortical thickness associated with a longer duration of epilepsy in the all-epilepsies, all-other-epilepsies, and right MTLE groups (beta, b < −0.0018; P < 1.49 × 10−4). In the largest neuroimaging study of epilepsy to date, we provide information on the common epilepsies that could not be realistically acquired in any other way. Our study provides a robust ranking of brain measures that can be further targeted for study in genetic and neuropathological studies. This worldwide initiative identifies patterns of shared grey matter reduction across epilepsy syndromes, and distinctive abnormalities between epilepsy syndromes, which inform our understanding of epilepsy as a network disorder, and indicate that certain epilepsy syndromes involve more widespread structural compromise than previously assumed.

Marzia was interviewed about her newsworthy OHBM 2017 contribution!! Click here to read the interview!

Our paper with the title “Overdominant effect of a CHRNA4 polymorphism on cingulo-opercular network activity and cognitive control” is now available online at the Journal of Neuroscience.

The nicotinic system plays an important role in cognitive control, and is implicated in several neuropsychiatric conditions. Yet, the contributions of genetic variability in this system to individuals’ cognitive control abilities are poorly understood, and the brain processes that mediate such genetic contributions remain largely unidentified. In this first large-scale neuroimaging genetics study of the human nicotinic receptor system (two cohorts, males and females, fMRI total N=1586, behavioral total N=3650), we investigated a common polymorphism of the high-affinity nicotinic receptor α4β2 (rs1044396 on the CHRNA4 gene) previously implicated in behavioral and nicotine-related studies (albeit with inconsistent major/minor allele impacts). Based on our prior neuroimaging findings, we expected this polymorphism to impact neural activity in the cingulo-opercular network involved in core cognitive control processes including maintenance of alertness. Consistent across the cohorts, all cortical areas of the cingulo-opercular network showed higher activity in heterozygotes compared to both types of homozygotes during cognitive engagement. This inverted U-shaped relation reflects an overdominant effect, i.e. allelic interaction (cumulative evidence p=1.33*10-5). Furthermore, heterozygotes performed more accurately in behavioral tasks that primarily depend on sustained alertness. No effects were observed for haplotypes of the surrounding CHRNA4 region, supporting a true overdominant effect at rs1044396. As a possible mechanism, we observed that this polymorphism is an expression quantitative trait locus (eQTL) modulating CHRNA4 expression levels. This is the first report of overdominance in the nicotinic system. These findings connect CHRNA4 genotype, cingulo-opercular network activation and sustained alertness, providing insights into how genetics shapes individuals’ cognitive control abilities.

The nicotinic acetylcholine system plays a central role in neuromodulatory regulation of cognitive control processes, and is dysregulated in several neuropsychiatric disorders. In spite of this functional importance, no large-scale neuroimaging genetics studies have targeted the contributions of genetic variability in this system to human brain activity. Here, we show impact of a common polymorphism of the high-affinity nicotinic receptor α4β2, consistent across brain activity and behavior in two large human cohorts. We report a hitherto unknown overdominant effect (allelic interaction) at this locus, where the heterozygotes show higher activity in the cingulo-opercular network underlying alertness maintenance, and higher behavioral alertness performance than both homozygous groups. This gene-brain-behavior relationship informs about the biological basis of inter-individual differences in cognitive control.